September 26, 2012, Self Represented Litigant, Andre Murray did attend Court, making a 'Special Appearance', thereby, not granting jurisdiction to the Court 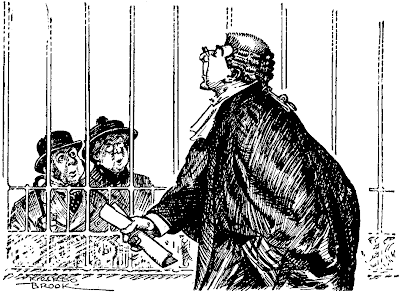 September 26,  2012 I  did attend Provincial Court of New Brunswick by  making a  Special Appearance to challenge jurisdiction of the Court, [which means (for example) my special appearance is in the Natural Person, therefore could transact as a "special plea" if continued to trial; constituting a sufficient answer to the action of law; thereby preventing the Crown (if involved) from further prosecuting with effect].
Moreover, I did not attorn to this Courts jurisdiction to determine the issues ; without attorning to the Court's jurisdiction the Court can not find jurisdiction to determine matters which may affect me]   the Judge: Madame Justice Mary Jane Richards having received a copy of the herein below provided three documents, furthermore, thereafter as self represented Defendant Andre Murray explained the substance of the contents, the Court determined that a adjournment for one month, until October 24, would be necessary to study the subject materials as found with the following  documents as listed :
1.       Notice of Application FORM 1 Dated September 25, 2012;
2.       Affidavit of Andre Murray Dated September 25, 2012;
3.       Pre- Hearing Brief to be used September 26, 2012 at 1:30 PM

FREDERICTON POLICE FORCE Sergeant Matt Myers poses here below for picture. Sergeant Matt Myers issues impugned by-law tickets without including a Notice of Prosecution, which has in effect created many hardships for his innocent victims.
Please read below learn how this form of subtle legal entanglement / 'entrapment' is being challenged by Self Represented Litigant Andre Murray

Jurisprudence [ the study and theory of law] requires that it be appropriate or necessary for the proper administration of Law, further, that the Courts of Law must treat every part of an act as presumed to be of some effect and is not to be treated as meaningless unless absolutely necessary

Maxim: The meaning of words is the spirit of the law.

According to section 12(2) of Provincial Offences Procedure Act, SNB 1987, c P-22.1, proceedings in respect of the offence charged in the ticket (procedures), commence when the notice of prosecution is filed with the judge.

According to section 12(1) of Provincial Offences Procedure Act, SNB 1987, c P-22.1, unless payment of a fixed penalty is made in accordance with section 14 within the time stated in the ticket, the notice of prosecution shall be filed with a judge no later than the date stated in the ticket for the defendant’s appearance.

As a result pursuant to and according to section 106(5) - Filing an 'Information' paper, instead of a the Notice of Prosecution consequentially: (1) mislead the defendant; (2) substantial injustice would be caused if the court overlooks  the fact that no notice of prosecution was issued at the time of the ticket being served, notice of prosecution  was not filled according to the Act in prescribed form and the Notice of Prosecution was never filled with the Court before the date of the first appearance (August 15, 2012) as required by section 12(1) of Provincial Offences Procedure Act, SNB 1987, c P-22.1, consequentially (c) the injustice that would be caused to the defendant by curing the defect cannot be overcome by the granting of an adjournment.

Madame Justice Mary Jane Richards, however, did issue a SUMMONS TO DEFENDANT evidentially, because, there exists a provision within the Provincial Offences Procedure Act, S.N.B. 1987, c.P-22.1, s.6(2)(a)(i) that states (to the effect) should the necessity arise, a presiding judge may issue a WARRANT and or SUMMONS TO DEFENDANT that which may be appropriate in the particular circumstances to bring the accused to answer the allegations (as the case may be)

Although the herein above paragraph may deceivingly appear to the readers as if I concur, when in fact is I disagree with the presiding Justice Mary Jane Richards in her decision to issue a FORM 3, SUMMONS TO DEFENDANT Dated July 18, 2012, regarding ticket G281802, which has unnecessarily affected me.

This injustice which appears to have become established and entrenched within the Provincial Court of New Brunswick quite some time ago, as reported by Justice Mary Jane Richards. It is likely resulting from a  impugned president, constantly overlooked for quite some time, and consequentially, has become the status quo.

Presiding Justice Mary Jane Richards upon hearing my explanation appeared to be genuinely surprised that I had discovered this defect and or procedural error.

Furthermore, I therefore assert that this defect is an incurable defect; please kindly read and consider the ramification of a Incurable Defect according to the the Provincial Offences Procedure Act, S.N.B. 1987, c.P-22.1, s.106(5).

What is the significance of this subject Incurable Defect?

As reported the Provincial Court of New Brunswick so have been proceeding in this impugned matter for quite a long time!

The fact is (once again for the readers) the subject ticket as issued to Andre Murray by Police officer Myers had the required scheduled Court appearance Date omitted from the ticket, as Police officer Myers failed to complete a Notice of Prosecution whereby the accused Andre Murray would have discovered a scheduled Court hearing date .
Since the accused defendant did not fail to appear at a time and place fixed by a judge for trial or for the resumption of a trial that has been adjourned, moreover, since the proceedings were supposed to be commenced by the filing of a Notice of Prosecution, consequentially, Judge Mary Jane Richards did not have any jurisdiction to issue a SUMMONS TO DEFENDANT, at that particular subject time of issue, moreover, as must be abundantly clear not  under those circumstances.

A Judge gains jurisdiction to issue a “Failure To Appear” SUMMONS TO DEFENDANT (with a heading “Failure To Appear”) according to section 29(2) of Provincial Offences Procedure Act, S.N.B. 1987, c.P-22.1 only after the Defendant fails to appear at the first scheduled hearing, however the accused in this matter Andre Murray never received a Notice of Prosecution for this subject matter, moreover the Honorable Court did not receive a Notice of Prosecution, because a Notice of Prosecution was never issued by arresting officer Myers. Readers must comprehend that the Date of the first hearing must reasonably be written on the Notice of Prosecution at the time of (in this case) the by-law Ticket being issued, furthermore in prescribed form, as stated within the subject Act, although this was not the case. Incidentially the actual subject proceedings:“Failure To Appear” SUMMONS TO DEFENDANT were initiated by an impugned process because of the absence of a Court Filed Notice of Prosecution, paradoxically the accused Andre Murray would never have had reason to believe that an appearance within the Provincial Court was required of him  this of course is the reason,  the Judge mistakenly issued a SUMMONS TO DEFENDANT, however, this remedy: “Failure To Appear” SUMMONS TO DEFENDANT was not at this particular subject time available to the presiding judge. Remember when a judge acts without jurisdiction, that Judge loses judicial immunity to prosecution, and becomes personally liable for damages.
Please read the complete:
4.       Notice of Application FORM 1 Dated September 25, 2012;
5.       Affidavit of Andre Murray Dated September 25, 2012;
6.       Pre- Hearing Brief to be used September 26, 2012 at 1:30 PM

At the following links:

A Sept 25, 2012, Pre-Hearing Brief, as provided, by self represented litigant Andre Murray, to presiding Madame Justice Mary Jane Richards, hearing the Matter of Andre Murray's Jurisdictional Challenge, Andre Murray addressed the Court on that subject date, thereby advising the Learned Trial Judge of the significance of the of the subject Pre-Hearing Brief, subsequentially, following the review of the substance found within the subject Pre-Hearing Brief presiding Madame Justice Mary Jane Richards found it appropriate to adjourn this matter till October 2012, that the judge may further consider this matter before rendering any decisions. Please, readers must note, that Andre Murray has never attorned to the jurisdiction of any Court regarding this matter, Andre Murray has always honorably attempted to find remedy, by making what is called a Special Appearance, which prevents the Court from gaining jurisdiction over him.

Posted by Contributing Advocate at 08:28