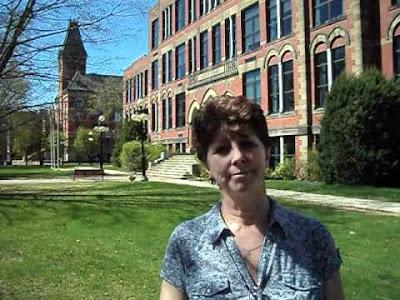 I attended Fredericton City Provincial Court on 17th July to observe Andre Murray's hearing before Justice Mary Jane Richards - supposedly an appearance in response to a "Promise to Appear" in respect of a charge of "Failure to Appear in Court 145 CCC". I know that is what we were supposed to be there for because I saw the actual Promise to Appear signed by Mr Murray and Cst. Paul Estey.

Imagine my surprise when Andre was called before the judge and told there was no such charge and he was there to enter a plea for two entirely different charges that he had been ordered to attend court and enter pleas for the next day. The Judge and Crown Counsel, Hilary Drain, were very hostile and argumentative, stating Mr Murray got it wrong and I was delighted when he held up the document confirming he was before the court for the failure to appear - signed and sealed and witnessed by a cop!

Andre also asked for a confirmation of whether an Information had been laid in respect of the Promise to Appear since, under the Criminal Code, if no information has been laid by the time of the hearing agreed in the Promise To Appear then the court loses jurisdiction over the defendant and has to dismiss the charge or the Crown must lay an Information and summons the accused.

Somehow, Mary Jane Richards construed that Andre was asking for an adjournment for all the matters to be heard the next day (which is not what was requested, only that the actual issue on the docket be dealt with) and dismissed him suggesting he go and confirm with the administration if an Information had been laid etc. I personally think she was trying to get Andre out of the courtroom because the agenda was to try and pretend the "Failure to Appear" charge never happened because the Court signed an invalid arrest warrant - MJR did not fill it out pursuant to the requirements of the Criminal Code and Mr Murray was in fact only late for court and called to confirm that.

Furthermore, when Andre came to court on the scheduled day when he supposedly missed his hearing he was only late and was advised by the administration to attend the afternoon session, which he was prevented from doing by the unnecesary arrest warrant and subsequent Promise to Appear that Cst Estey made him sign when he prevented Andre from attending before the judge in the afternoon by arresting him.

The trouble is, the judge had evidence that he diligently called the administration and confirmed he got the time and date wrong (hence no crime) and also he signed the Promise to Appear IN the courthouse ON the day of his scheduled appearance. The judge would, therefore, look pretty stupid continuing a prosecution (for the crime of being late!) with that information on the record so ... the court chose to get rid of that embarassing charge.

Hmmmm. So, the court and Crown can just get rid of a charge just like that when it pleases them? It appears so.

When Mr Murray was dismissed I left the courtroom and went with him to the admin office to ask about the mysterious disappearing charge of "Failure to Appear" to hear him be told, again, that the charge he was ordered to appear for that day was not on the docket, the charges that he had been ordered to plea on for the next day had been mysteriously (or negligently?) swapped to this day. How can the court get away with human error but we are arrested if we make one?

So, I personally think the Court wanted to confuse this self-represented party by having him turn up to face charges he was not prepared for and to quietly dispose of a charge that should never have been laid. We left court looking forward to whatever screw-up there might be the next day.